Family History Through the Alphabet Challenge : F is for...

Welcome to another week, and this week is the letter F. I thought about a post dedicated to fathers as it was Fathers Day in the UK and USA yesterday but, instead, I have chosen to write a post about Fakenham: 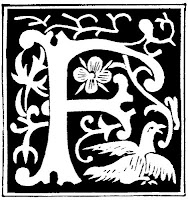 My ancestors lived in the Norfolk market town of Fakenham during the 1800s. Around 1825 they left Kings Lynn for Fakenham, which was then nineteen miles away. Situated on the River Wensum, Fakenham is the Saxon name for "fair place" or "fair place on a fair river". The population of Fakenham in 1831 was 2, 085.
The 1839 Pigot's Directory states that Fakenham once had salt pits. Indeed, the Salt Pans are mentioned in the Domesday Book, but these had long since disappeared by the 1830s. Fakenham's economy was later replaced by crepe manufacturing, Fakenham Mill, corn growers markets and a renowned printing industry. Thomas Miller was the first person to bring the printing press to the town in the 1800s. My 3 x great-grandfather learnt the printing trade himself and established a successful business in the nearby Norfolk market town of Holt.

In Jim Baldwin's ©1982 book Fakenham: Town on the Wensum he says, "The town of Fakenham developed around Tunn Street and Swan Street. In fact the oldest original house remaining in the town is situated at the junction of these two streets...Oak Street formed part of the early development of Fakenham...". My 4 x great-grandfather lived in Oak Street and, later in Swan Street and White Horse Street. He was the town's organist and musical instrument seller. The church of Fakenham is St Peter and is well noted for its tower which can be seen from many distant views. In 1826 a brand new organ was bought for the church by the late Rector. My 4 x great-grandfather would have been a part of this celebrated day and he would have played this new organ to the congregation of Fakenham.

The 1839 Pigot's Directory likes to boast the Robert Bloomfield, "celebrated as the author of The Farmer's Boy and many other sweet poems of a rural and domestic character, has, in a pleasing tale, called The Fakenham Ghost, eulogized this town in a very pretty manner". Others argue that Bloomfield referred to Fakenham Magna in Suffolk. Here are the first four stanzas:
Benighted was an ancient dame,
And fearful haste she made
To gain the vale of Fakenham,
And hail its willow shade.

Her footsteps knew no idle stops,
But followed faster still;
And echo'd to the darksome copse
That whispered on the hill.
Darker it grew, and darker fears
Came o'er her troubled mind;
When now, a short quick step hears
Came patting close behind.
She turned; it stopt! naught could she see
Upon the gloomy plain!
But as she strove the Sprite to flee,
She heard the same again.

Finally, this from a Most Haunted message board: Wondered why it rains nearly every market day in Fakenham? Well the story is that years ago Walsingham used to hold a market, but then moved to Fakenham. There was a witch of Walsingham who was upset by this and so put a curse on the market of Fakenham. She said: "There will be more wet than dry days for Fakenham market." People who have heard of this call this the story of the Walsingham witch. You can always guarantee that there will be more wet market days than dry - is it just a coincidence?